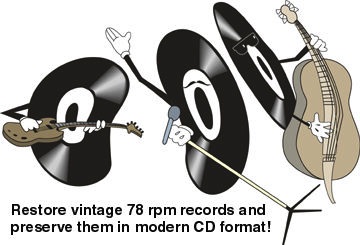 "Wonderful!  Worth every penny!  Count me as a very satisfied customer. This is going to be the best gift my Mom gets this year, for sure." - Robert Reichert, Connecticut U.S.A.

Very few people today have access to turntables capable of playing 78 rpm records. A vast wealth of popular music going back before World War I until the early 1950's was recorded at 78 rpm. Using the latest audio restoration software, these old records can now sound sometimes even better than they did when they were new. Records made as long ago as the mid 1920's have surprisingly good audio fidelity. Transferring these recordings to CD format allows almost anyone to once again enjoy the wonderful music of an earlier era.

The original record is first cleaned in a Nitty Gritty record cleaning system which washes and vacuums grit right out of the grooves. The record is then played at the correct speed on a state of the art Numark professional turntable through an Esoteric Sound re-equalizer to bring out all the original audio fidelity. The audio is next passed through a special wide frequency range sound card into a PC computer where it is stored as a file. The audio file is processed using the latest Diamond Cut Seven audio restoration software. First the audio is run through a "declicking" filter to remove most surface clicks and pops from the recording and then through a "continuous noise filter" to reduce background noise. The noise is sampled at the beginning of the record before the recording begins and then the filter takes that same noise out of the entire recording without disturbing the actual music or voice information. Download the sample MP3 recordings below, "Before" and "After", to see how much quieter the recording is after utilizing this process. The restored audio file is now ready to transfer to CD format.

782CD.com makes the highest audio fidelity its primary goal. Sometimes this means that a small amount of surface noise and a few stray clicks may remain within the final product. Any further processing would deteriorate the full bass and treble response which is most desirable.

Recordings that are over seventy-five years old are considered to be in the public domain. Newer recordings owned and copied for personal use can also be considered to be within the rules of fair usage. Clients agree to assume all risks and responsibilities regarding copyright issues.

How long will it take?

All work is done on weekends. Orders received by Friday are normally done over the same weekend and shipped Monday. With overnight shipping, it is possible to have your order on Tuesday. There is a limit of 10 selections for this type of service. Larger orders will take longer.